Y1 or Y2 decision time for the SPX.

After struggling in Y2 Ratio will the SPX welcome a move back to the Y1 bandwidth. 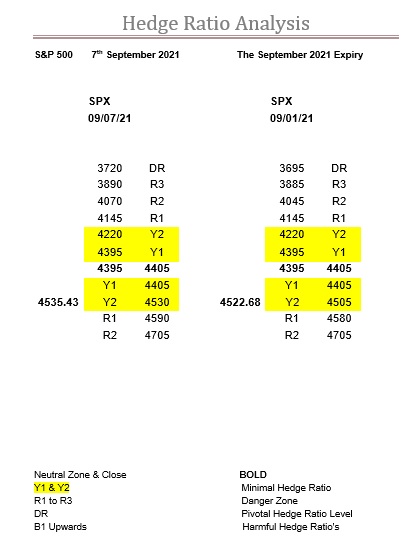 This is definitely a first for us, that is, publishing the first note on an expiry in the actual month of its expiry.

Considering the market fell back to its zone at 4400 for the August expiry it’s no real surprise “normal service” was resumed as soon as it was over.

Therefore, and again absolutely no surprise, that the market started hitting new highs last week as Y2 above the zone didn’t even start until 4505.

The interesting aspect was last Friday the 27th, as Y2 hadn’t moved, and yet the market powered on up right through it.

Sadly, we weren’t witness to whether or not it had any effect on the market as it blasted through, only seeing the end result the next day.

This means that the start of this week has been very illuminating as this market handles being in the Y2 ratio bandwidth.

Of course, this is a triple, so we would expect as much, but perhaps not quite so early on.

Otherwise, it is pretty much exactly as we have been seeing over the last few expiries.

Retreating ratios above the zone, which in itself is looking to move up, all wrapped up in an overall lack of ratio, albeit being a triple these are far far higher than an intermediary, but comparing like with like, then the argument still holds true.

However, what is a big concern, is that the Y1 ratio bandwidth is 285-points, with the overall Y ratio bandwidth 435-points, this is as wide as we have ever seen it…which is remarkable considering this is a triple.

We are essentially back to our automatic car in neutral, just nobody say “BOO”.

After the first week when the SPX made full use of its enormously wide Y1 ratio bandwidth by effectively traversing the entire width of it, last week must have come as bit of a shock.

And there is no doubt about it, but the last week was all about this index struggling to make any more forward progression now it was deeply into the Y2 ratio.

Although this has not been uncommon of late, it is still rather sad, as even Y2 is classed as “minimal”. Especially in a triple.

Anyway, we have eventually seen some movement in Y2 above the zone, as it has now slipped to 4530.

The significance being that, with this level now in retreat, coupled with the market being practically at the same point now, then it is decision time for this index.

Whether to continue to struggle in Y2, or retreat back into the far more comfortable Y1 ratio bandwidth.

If it does choose the latter, then further forward movement could well be limited to how quickly Y2 continues to retreat.

All the while there remains a spectacularly wide Y1 ratio bandwidth beneath it, which still goes all the way down to 4220, a mere 310-points away.

Of course, there is the zone before then, so should the market indeed turn south, then this should provide the first line of support.

But if the SPX follows the pattern of the last few expiries, then we should see it bumping along behind Y2, knocking on that door and hopefully forcing that retreat to at least continue, if not accelerate.

In the meantime, we haven’t seen an expiry recently that the zone itself hasn’t moved up, so come the rollover and expiry next week, even that target could very easily be a lot higher. But all the time the huge Y ratio bandwidths beneath this market will be there, so that risk will also be ever-present.