The FTSE now back to take on DR ratio again.

To take on DR again, or not, this is the FTSE question? 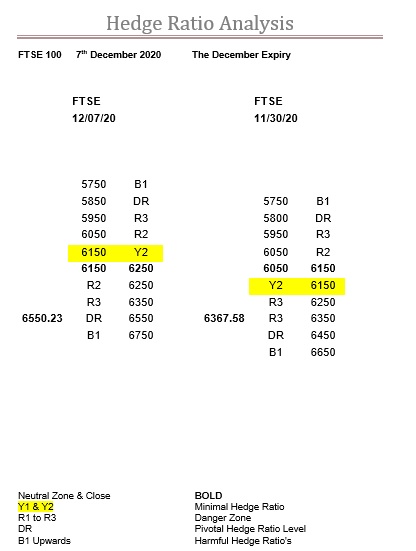 The FTSE was desperate to go higher, that was plain for all to see, so it was perhaps very confusing for it to keep encountering all those futures forced out by the dynamic delta.

Having closed on the 20th with its fingertips above the critical level, courtesy of the auction, then being DR at 6350, it benefitted from the vaccine news from AstraZeneca.

But, peaking at just 6392.08, and then finishing down 17.61-points at 6333.84, below DR, really just went to show the markets surprise and reaction to those futures that were being sold.

Tuesday saw it again try to break free, but for the rest of last week it was obvious to all who knew it was trying to wade through DR ratio why it was struggling so much, as it kept gravitating back towards that critical 6350 level.

So, after what was an exciting week, the net result is just a move of a mere 16-points.

Looking ahead, despite the ratios changing above the zone, 6350 is still the critical level, even though it is now R3.

This means the title of DR has now passed to 6450, making for a nice and tight bandwidth, or trading range.

The only question, is whether or not this index has now grown comfortable being in DR ratio, and the only way we would know is to have calculated the ratios daily, and therefore know exactly when 6350 changed, and thereby be able to gauge how the market reacted at that time.

Obviously, the ratios are falling above the zone, so, unless the test is immediate, then we feel far more confident in calling 6550 as the next level that could surprise this market with a bit of dynamic delta hedging.

As we said, the FTSE was “desperate to go higher”, and it has.

The issue has been, how difficult it has found it, which is exactly the same with the SPX incidentally, as everybody is bullish, so they are finding it hard to fathom why there are so many futures being sold.

Of course, those that are aware of the ratios, know it is because of the dynamic delta, but many don’t.

Another point we make a lot, is that we should calculate this daily, but as we don’t, sadly we just don’t know when the zone changed, or the ratios.

Of course, we said the zone would move, but when it did, and more importantly, when DR moved from 6450 to 6550, would have been nice to know.

Therefore, the fact that this index closed at 6550.23, right on it, is naturally no coincidence, but it is also very significant for today.

There are still two weeks to go in this expiry, and the zone is going to make its presence felt more and more.

Of course, it is not impossible for this market to maintain this level of bullishness despite the dynamic delta, but, historically, London has struggled to do so for the entire 4-weeks.

Also, there is no doubt that the ratios are falling above a rising zone, but whether they can do so at a pace fast enough to alleviate this index trying to wade through DR will be the issue this week.

We can’t see it, but a Brexit breakthrough may knock the derivative influence into touch.

This would be a novelty, as it is very rare that fundamentals have more influence in the biggest of the big expiries, but that’s markets for you.