The FTSE does get its new zone.

The FTSE does get its new zone. 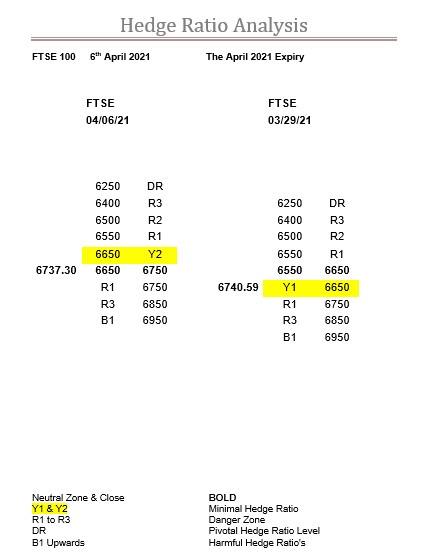 The first week of the April expiry was all about the zone’s upper boundary, 6650.

Tuesday was a rest day, but battle recommenced on the Wednesday, with the intraday low of 6649.37.

But what made these tests so remarkable, was that they occurred very first thing, right after the opening bell, and the market tumbled a very significant number of points, hit the boundary, then bounced straight back up, in both instances.

This made Thursday a bit of a defining moment, as when the market hit 6650 for strike 3, it only held it up for about 10 to 15 minutes, which is exactly what we would expect, and thereafter traded mainly 15-points below it.

A decent Wall St. came to the rescue, the SPX managing to dig itself out from below its own zone and therefore back into bullish territory.

Therefore, we suspect the second week of the April expiry, will be all about 6750.

And, for those watching closely, the closing auction actually traded up to 6747.3, but it didn’t manage to hold it.

Interestingly, the French would actually count this as the intraday high.

But we all know how weird and inaccurate the FTSE’s O, H, L, C really is by now.

So, 6750 is going to be the first test for the bulls, which means it will be very illuminating to see how they react, as after all, it is just R1.

Furthermore, we are still expecting the zone to actually shift to 6650-6750, which may add a bit more weight to the R1 ratio already there.

The other aspect to note, is that the next two levels, 6850 and 6950, both skip a ratio level, which, if the market even gets there, will be a very nasty surprise indeed.

Finally, worth noting how strong the ratios are below the zone, which is nice to see.

Well, we got our move in the zone and we strongly suspect it was last week as well, or at least, this is what the ratios suggest, as they are so developed already.

This would also go a very long way to explaining why 6750 was so robust last week, although R1 could have done the job on its own, we feel that it also being the zone upper boundary did in fact give it that added bit of resilience.

Of course, today we are not only going to be playing catch-up to the strength we saw on the Street last Thursday, but also from yesterday.

If this is indeed the case, then R3 at 6850 may well enter into the equation.

The realignment of the ratios that we mentioned last week, namely strengthening below and weakening above, resulting in the zone move, has continued, although the ratio levels above the zone are still the same, not yet reflecting this.

Nevertheless, should it test it, remember the market will be going from R1, skipping a level, to a full-frontal assault on R3, a very high level.

Nothing is impossible, but judging by the lack of commitment at lower levels thus far this expiry, we just think that this might be a few too many futures for it to absorb just now.

And this is the problem facing London, as it lags so far behind almost every other index that are hitting new all-time highs.

Basically, whenever the bulls try to get their stampede on, they come up against some serious ratio levels.

In stark contrast, the SPX, has only now, having added practically 100-points to its previous all-time high, hit R1, its journey being entirely through minimal Y ratio.