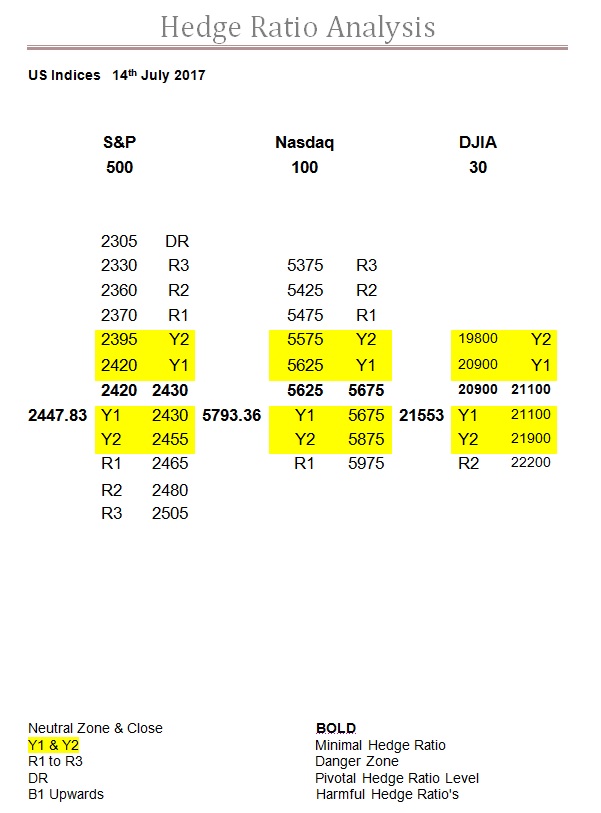 All very lackluster yesterday and it seems even the SPX was waiting for someone else to make the first move.

By which we really mean the decision making DJX and the lack of anything from that direction left this index becalmed, only managing a 8 point daily range.

However activity is ok so it does just looks like a pause and the first test of the bulls commitment will be when or if it tests Y2 at 2455.

The NDX just like the SPX above shied away from a test of their step-up level, which is still at 5825 but not as potent as it was, only getting as high as 5806.18, this leaves 5850 as the heir apparent.

Again today the ratios are a lot firmer below the zone and easier above it until you get to the R ratio where it has actually come in a bit.

However just above the zone they have fallen so far that we now get the situation of a potentially upwardly mobile NZ, which unusually has only had one minor move so far this expiry.

In the last 5 sessions this index has put on almost 200 points and yet only now is it getting to the most minor ratio based resistance possible, and the way the ratio is currently developing is very bullish so all that remains is a matter of belief having come so far already.

You are on a rope swing that goes a long way out over the ocean and just as you let go of the rope when it is at it furthest point the tide suddenly recedes and you are left momentarily suspended staring at a rather hard landing a long way down or praying that it comes back in before you reach the beach.

This is exactly what has happened in the DJX as on the back of the highest activity so far this expiry their NZ has fallen to 20900-21100, which is a long way down.