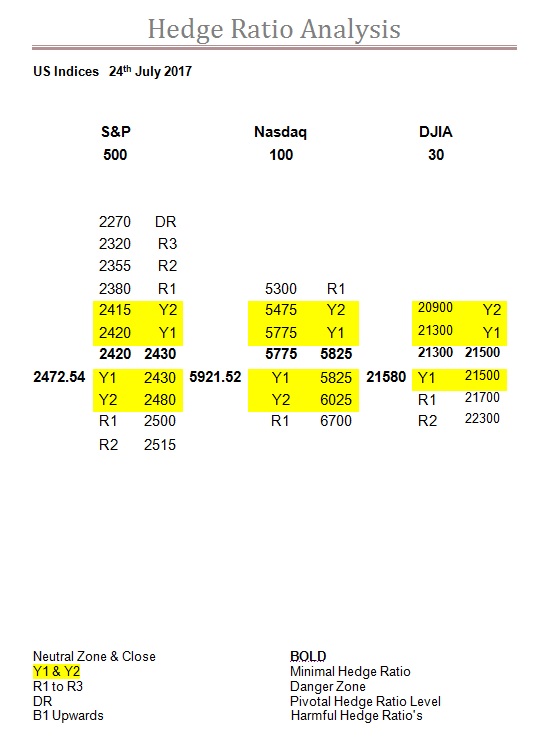 Here in August the NZ is still at the old level which we would expect to change very soon, and in fact it may even go one better and jump to 2470-2480.

No two ways about it the ratios only go as high as R2 above the zone and with a rising NZ then the potential is obvious so the only question is whether or not they will be allowed to, and the answer to this we feel lies with the DJX.

The settlement in the NDX was 5892.11 and at the end their NZ was 5875-5925, which actually means they were the only ones to settle inside their zone.

As you can see August is still seriously underdeveloped so again a small pebble in a small puddle makes relatively big waves, which is this case where activity is concerned here.

The big issue here is that we are back to a 4 week expiry and therefore everything should be quicker than in July, so if the big players are circling then we would probably be looking at week 2, which means possible weakness until then.

The settlement for the DJX was 21567 and their NZ in July was 21300-21500, so very close but again all very calm and relaxed. In fact the only obvious reaction was at the very start of the day to get the settlement prices as close as possible, but it almost seemed bit of an afterthought.

More importantly the real issue here is the proximity of R1 to the market and if it gets there to test it how it will react?

Remember that for almost the first three weeks  in July this index never left its NZ so as it is starting outside it this expiry it is going to have to be aggressive from the word go, and to us at least it is not giving that sort of impression.