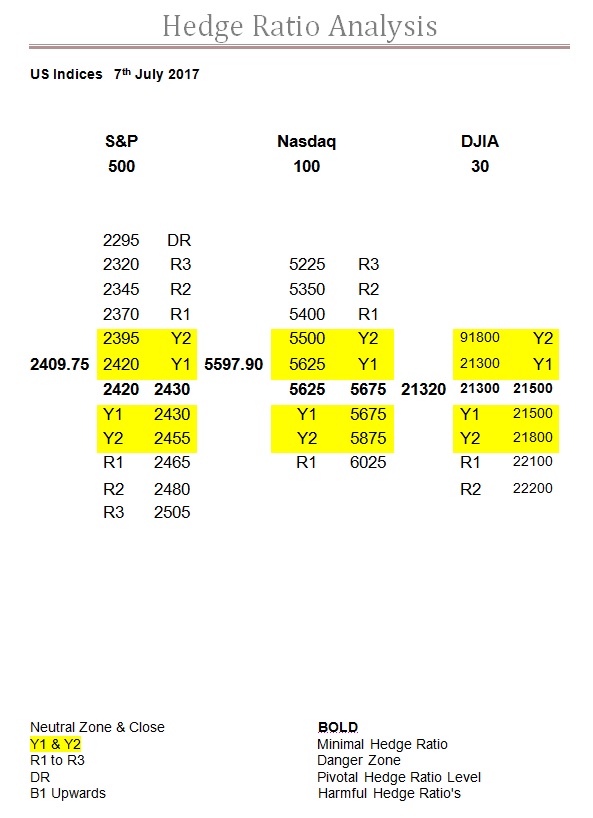 Judging by the activity in the SPX the derivative players at least are still on holiday, but the market is beginning to act as it should do in so much Y ratio.

Although at the moment the real driving force is the DJX we feel (see below) as with so much ratio latitude here they are the only ones encountering anything of substance.

It has hit Y2 when it was 2450 earlier on in this expiry, and which still remains its high, so it will be very revealing if or when it hits the corresponding level at 2395, and don’t forget we are only talking the Y ratio.

Generally in the NDX when they go to all that trouble to add so many strikes then activity appears the next day perhaps just to justify all that effort, but not so far this time.

However it does show that there is still interest unlike the SPX that is on day 4 of little or scant activity.

Although here it is yet to encounter Y2 ratio, the high being 5845.15 this expiry, which was just hitting the “step-up” within the Y1 ratio bandwidth as we refer to it, and this corresponding level is 5575 with another at 5525.

Of course the low yesterday was 5579.64 so it has already encountered this first level when it was down 69.18 so today will be a real decider.

At least we have some activity today in the DJX, but also please remember that a small pebble in a tiny puddle makes big waves, on top of which we are at the end of the third week of this expiry.

Therefore it is worth pointing out that even “moderate” activity has changed the ratios, the important one is Y2 below the zone jumping 300 points, which just goes to show how unbelievable thin it all still is here.

The low yesterday was 21305 so a very solid test of the lower boundary of its NZ, after testing the upper boundary on Wednesday with the high of 21505, this means it knows exactly what’s where now.

Of course should it breakout then it has a lot of Y1 ratio to utilise just like the other two, and hence why our comment above about being the only one encountering anything of any substance.