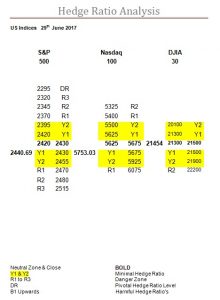 Just as we said yesterday in the SPX “as it discovers that it continues to not encounter anything higher (than Y1 ratio) these swings should start to increase”.

This holds true for today as well and interestingly it seemed to totally ignore its NZ, although this move does fulfil our requirement of at least touching its zone at some stage during the expiry.

Overall the Y ratio bandwidth still stretches for 100 points so there is still a lot left in this expiry regardless of the fact that from the open on the first day at 2442.55 this index has moved less than 2 points, but it has been a very exciting fall of 1.86 points.

And more of the same we certainly got here in the NDX and more importantly it seems the other two have now realised how little ratio there is in their respective markets and have joined in.

We have seen the NZ move up a notch, and any move up is good but this seems to us, like the recent DJX move, it is more by default than design and inspired mainly by the lack of ratio rather than anything else.

A strong open for the DJX being up 62 points at 21372 meant yesterday’s low and close at 21310 remains the first test of lower boundary of this NZ.

The high yesterday of 21478 is also very close to a test of the upper boundary, being just 22 points shy, as it is such a large index, and despite being just 0.10% we are not calling this a bandwidth test although we admit this is very much one of those 50:50 calls.

If we do get a breakout here and the DJX does eventually join the party as we said there is more Y1 ratio here than in the NDX so 2% + moves could easily become standard.