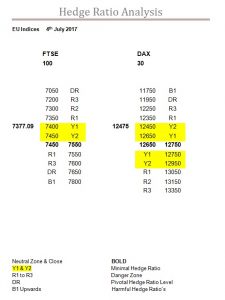 Not exactly what we would call an emphatic break from the FTSE yesterday as it hit the top of our trading range at 7350 first thing, tried very hard but failed and then traded mid range until the afternoon.

Then it took a resurgent Street to force them over 7350 and back into the Y ratios.

Just in time as the ratios below the zone have tumbled, R3 being the noticeable move to  7200, but R2 at 7300 that provided that much needed support on Friday (low 7302.71) is now just hanging on by its fingertips.

The real issue for today is whether the NZ will change to 7350-7450, which is likely, then this will just reinforce today’s trading range.

The DAX being in a very similar situation to the FTSE was more emphatic about their move, and the open here at 12396 also took them right up to their R1 ratio level, but here they managed to push on up and through it.

In fact the low here was 12390 so they were in no mood to retreat either.

The big news here is the drop in the NZ, which wasn’t flagged, but with so much minimal Y1 around still was easily possible but also goes to highlight how weak the ratios are below the zone, so again like London this recovery is “just in time” and puts it back into this vast expanse of Y ratio so hang on tight.