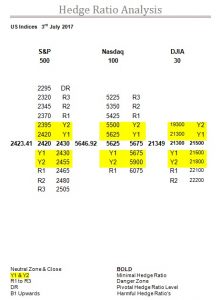 Friday for the SPX was all about seeking refuge, a chance for a re-evaluation as it were.

Therefore for almost the entire day it spent inside its zone, so hopefully it will have come to a decision as it has now twice tested and twice closed in bear territory so it knows where that is now.

The NDX was basically a carbon copy of the SPX, the difference here is that activity was very high indeed at the end of last week and this historically suggests an agenda or view that is normally not static.

The only other difference is here it has been below its zone into bear territory, once, but has yet to close below it.

Rather surprisingly the DJX is the odd one out as it only managed a 61 point gap up at their open which only took them into the bottom quarter of their NZ.

In their defense they do have a 200 point wide zone so it is the widest and if the others are being restricted to a tight range it provides very little opportunity here.

Y2 below the zone has moved up slightly and above the zone it has also improved marginally and we see R1 again.