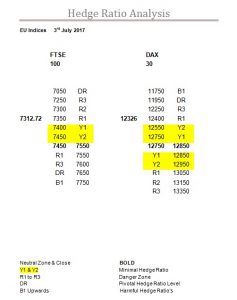 The FTSE just like Germany is in R1 ratio but here R2 at 7300 held with the market low being 7302.71 and more importantly it has remained the same today.

The change here today is the introduction of Y1 which brings about the likelihood of a change in the NZ to 7350-7450, and the first backward step (bearish) we have seen in a while.

These two markets are effectively fighting against the same ratio levels, differing degrees of fluidity admittedly but at least they are in sync, it’s just the distance between the respective ratios on each market is markedly different which is why one has been moving by a far greater percent than the other.

We said Friday was a big day for the DAX in particular the open which was a rather timid rise of 8 points to 12424, the significance of this was that it was still in the R1 ratio bandwidth.

So when it got to 12450 (high 12459) it didn’t have enough strength to break through and back into the Y ratios which left the other end of our trading range 12350 and R2 a distinct possibility.

The low was 12319 and even by it didn’t manage to get back to it but fortunately the ratios have all fallen considerably below the zone and R2 has gone altogether.

This makes R3 at 12250 not only a considerable step up in ratio but also a very stern test for the bears and with R1 at the other end then above 12400 it will now be back in the Y ratios.