FTSE now has it all to do after a torrid start to the Sept expiry.

For the FTSE the real hard work starts now. 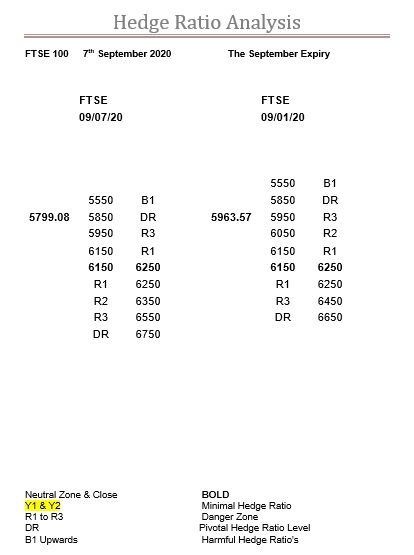 Wowee, the first week in the Sept expiry certainly didn’t disappoint, as it had it all in there.

One of the really good things about the FTSE ratios, is they tend not to change that much, especially in the triples, so when you know where they are it is just a question of watching the market interact with them.

Perfect case in point, was Monday 24th August, and don’t forget the previous Friday this index had tested R3 with the intraday low of 5948.80, so our eyes were on 6050, being the ratio level at the other end of that bandwidth.

And the market just blew it away in the first few minutes of trading.

That made the next target 6150, the bottom boundary of its zone, and it duly obliged the very next day, with the intraday high of 6173.48.

Basically, it had achieved in two days what we thought might take it a week or two.

The warning sign was when it couldn’t hold itself in its zone, and was clearly a case of too far too fast to us.

6050 then became the focus, and the last three days of last week were all about that level, and we lost count how many times the market challenged it, and lost.

Which basically put our old friend, 5950, firmly back into the picture.

Which is where we find ourselves today, and they aren’t quite as strong as they were last week, but there is little in it, so R3 should prove a very stern test for the bears, as this level of ratio should provide quite a considerable amount of futures buying courtesy of the dynamic delta, so keep your eyes on those screens, as any decent bounce off this level should provide enough impetus to push it back past 6050 and get it heading back towards its zone.

No bounce off 5950 this time, and it probably didn’t help the fact that London was closed on Monday 31st August.

As this meant it had to play catch-up to a what was a weak Europe and the US on that day, when they came back on the Tuesday.

But, DR at 5850, did put up a decent fight, as it should, as that is a more appropriate level for a triple.

And the first three days of last week were all about 5850 and DR, with the close on Tuesday an impressive recovery to end at 5862.05.

Wednesday saw a rally, but sadly ran into our old friend 5950, which did make that a bandwidth test.

The fact it closed right on DR held out a glimmer of hope, otherwise why else would it, but the surrounding environment was not going to give it any assistance, especially with the Street being so weak, which was a problem we highlighted right at the very start of this expiry of course.

What we said back then was the SPX was above its zone, bumping into the R ratios, whereas the FTSE “was the polar opposite”, and no prizes for guessing which one won.

For the FTSE, it is now a very long way down to the next ratio level, but the bears are obviously struggling to cope with DR, and with two weeks to go, it won’t be long before the zone comes into play.

But it now has to get back up and over, not only DR but also R3 at 5950, to stand a chance by next week, so its certainly no given.