FTSE fights for its zone.

That has been one of the hardest fights the FTSE has ever had to hang on to its zone. 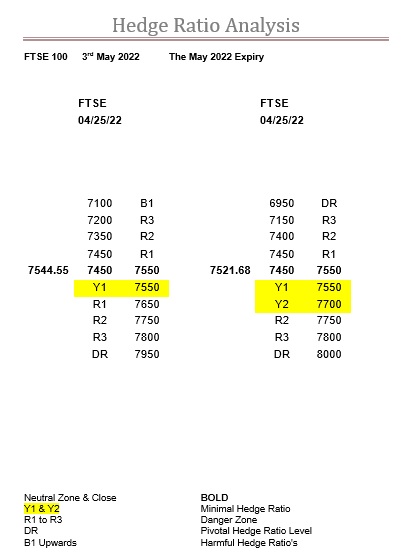 Looks like the lowly Y2 at 7650 provided enough dynamic delta futures selling to scare the FTSE into turning tail.

Although, it did take over half an hour at or around its intraday high of 7656.47 on Thursday 21st to make up its mind.

And, when you couple this with a weak Street overnight and then again on the Friday, you had the FTSE in a full-blown retreat back into the safety of its zone.

What is more, is that this expiry is still only a week old. So, plenty more time for some fun and games.

Of course, this is assuming the bulls wrest back control. But, as we said, there is still three weeks to go, so plenty of time.

But first, we should see a test of the bottom boundary of the zone at 7450, Which is also strengthened by the fact it is also R1. The fact that there is no Y ratio at all below the zone should give any bulls out there an excuse, even if the dynamic delta inspired futures buying doesn’t do it for them.

If the bears are really in control, and R1 isn’t enough, then backing it up is R2 immediately underneath at 7400. The big concern will be if this is not enough, then there is a very long way before we hit the next level of support, R3 at 7150.

The other alternative is that the market could just stay zone bound, which is not unheard of. If it does decide to take this easy option, then it could bounce around excitedly within its zone for the next two weeks, only breaking out in the final week, which we have seen quite a lot of in the past.

All of our assumptions last week were blown out of the water before the market even opened. Or to be more specific when the market opened circa 7387 on Monday 25th, as this was actually below R2 at 7400. Best lain plans and all that.

However, had one realised that the FTSE was stuck in the R2 ratio bandwidth, then the next few days made perfect sense as it tried to fight its way back up and out of it, despite the millstone of HSBC on the Tuesday.

The intraday highs of 7463.15 and 7458.24 on Tuesday and Wednesday respectively, just went to show how hard it was trying to break back into its zone.

Then the Friday was all about the upper boundary of the zone 7550, with the intraday high of 7569.80. So, in a way, last week was mostly all about the zone.

Looking ahead, and this time it will depend on the open as London not only has to react to Friday’s Street fall, but everything from Monday as well.

Despite all this we do still think that this index just wants to be in its zone, plain and simple. Well, at least for this week, as come the rollover and expiry everything tends to change anyway.

For the record R2 has now dropped to 7350, exactly when we of course don’t know, but this is immaterial now. However, going in the opposite direction are the other ratios below this.

Above the zone, the ratios have also strengthened, which means we have lost Y2, but at the same time above the zone is still the only place where we get any Y ratio at all. So, perhaps the scope has reduced now we have hit the halfway stage but, overall, the alignment remains the same.