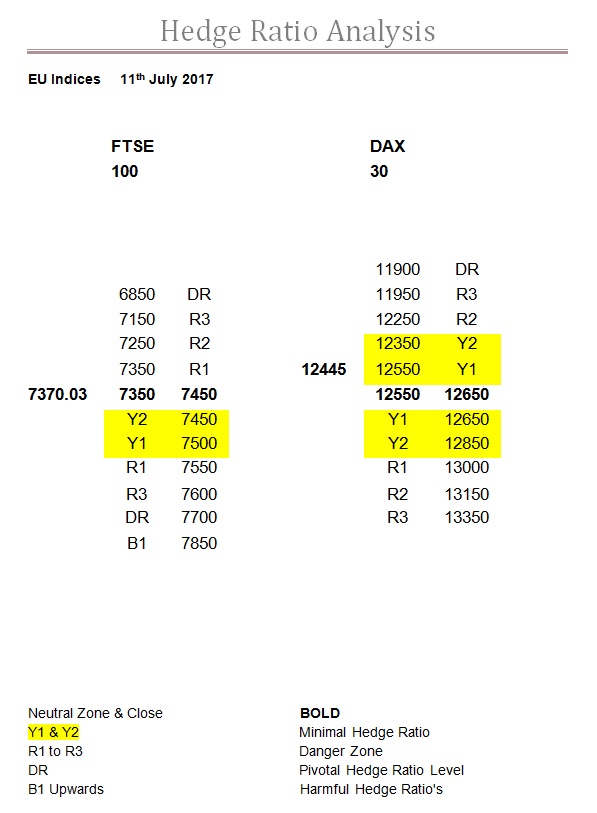 Fairly textbook day from the FTSE on Monday as having gone to all that trouble to get it on the bottom boundary then it would have to be something rather persuasive for the market to relinquish this grip.

We use “fairly” as the market did come back to the bottom boundary, and in fact camped out at 7350 for a good couple of hours, producing the low of 7344.31 into the bargain.

However when the Street confirmed it was unlikely to upset their plan the market then raced away to secure a strong foothold back inside its NZ, and as we have said previously this now means clear skies above until 7450.

By default the DAX has now got itself clear as on Monday it was still having terrible difficulty with Y2 which was then still at 12450.

This ratio has now slipped to 12350 so the net result is even though it closed at 12445 it now means it is back in the Y1 ratio bandwidth.

Being so very sensitive is a worry and is rather unusual and as this week goes on and builds towards the rollover next week we are sure this will rectify itself.

Normally when this index is in so much Y ratio we can easily be seeing daily moves of 1% to 3%.