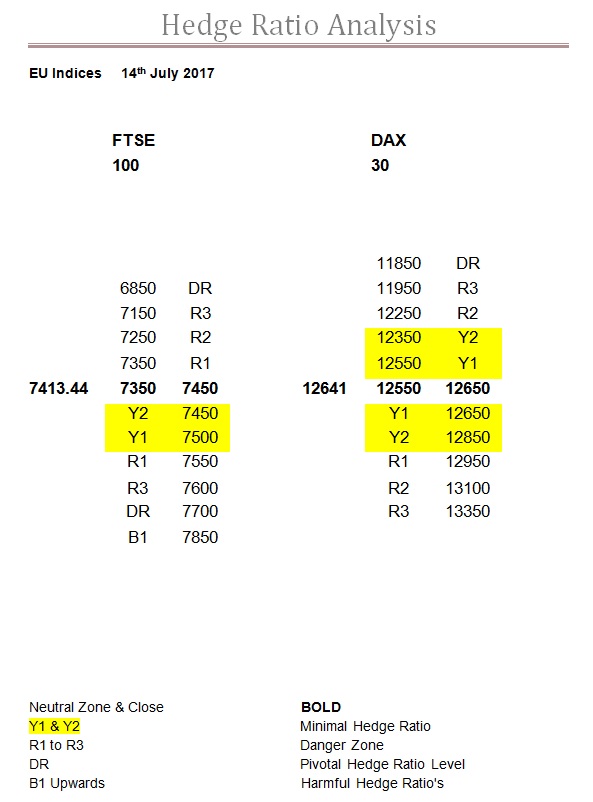 Last trading day before the rollover starts and the FTSE is safely inside its NZ, which could easily mean it stays here for the next few days until Wednesday, but that is a tough ask not to mention rather boring.

However having made the bold move on Wednesday yesterday was bit of a non event with a total daily range of just 25 points, so staying within this 100 point bandwidth could in fact be made to appear to be quite exciting.

There are a few caveats one of which is the ratios have tumbled below the zone although on the surface the only mover is DR slipping to 6850, but it has thrown up an outside chance of 7250-7350 being the next NZ, and all this despite activity by our measurements being zero.

The DAX was easily the more aggressive out of these two as it tried very hard to break out above its NZ.

This was very early on and it got as high as 12676 before it gave in or perhaps up and then it did spend a lot of the remainder of the day around 12650 so it seems the bulls may not have succeeded but they haven’t retreated very far.

This index does have acres of Y1 above the zone so it’s not really a big ask and as we said its high was against Y2 when that was at 12950 so it has coped with Y1 before, but it is also the rollover next week and where it wants to be on Wednesday may influence proceedings here as well.