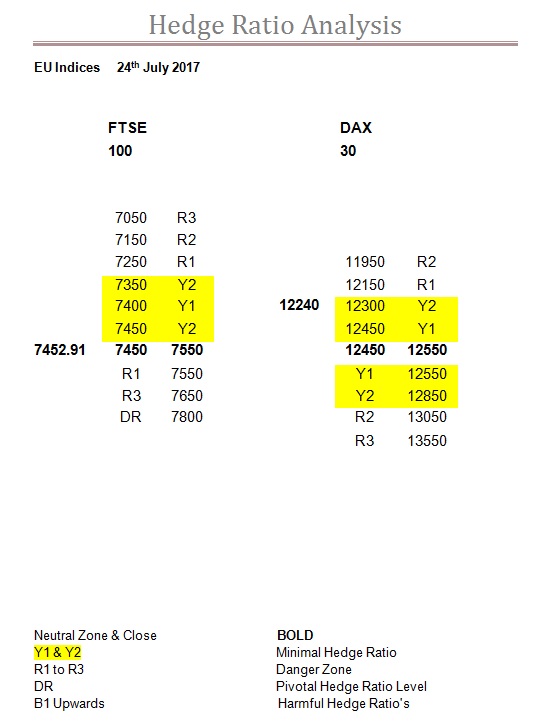 Welcome to the FTSE August expiry and back to the more normal four week format, this does tend to be a bit more exciting and which expires on 18th.

Being a rollover between intermediaries there is naturally a lack of ratio which can also add to the excitement as it can allow for greater volatility.

Friday saw this index claw itself back into its NZ for the close which it has held onto, albeit only just, despite losing 5.13 points in the auction, so the open today is critical.

The two main aspects to note are 7350-7450 now becomes far more obvious as the next potential NZ with the appearance of Y1 and above the current zone the ratio starts at R and climbs very steeply.

We would say welcome to the DAX but it isn’t in a very good place at the moment, and one really of its own making.

The first issue is when they lost control of the rollover last Tuesday, having been camped in their NZ for the previous few days. However this in itself was not the problem which was really their lack of desire to remedy it.

The second issue is the fact that they take so long to develop an expiry, what we refer to as a slow burn, so when something does go awry there is nothing in place to help.

This was further hindered this time by the change in the NZ as this also impedes ratio development.

R1 saved the day last expiry at 12300 so fingers crossed this time as there is precious little else as backup.