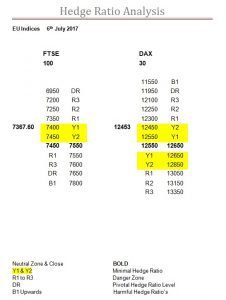 Wednesday for the FTSE looked on the surface as uneventful as the day before but there was some substance to the price action.

Basically it had a little taste of R1 at 7350 very early on although you would have to be on a minute bar to see it, then a couple of hours later it had a far more solid test of it lasting over half an hour and resulting in the low of 7347.52.

Finally it had another little pop at it mid afternoon, but again you would have to be on a minute bar chart to see it.

Therefore it seems to us it just needs that excuse and we still expect to see the NZ move to 7350-7450 so it needs that to happen sooner to reinforce R1 with being the bottom boundary of the zone as well.

For the DAX today brings the new NZ making the second drop this week, and a falling zone is never good.

Furthermore we have also got the first hint that it may not be over yet with 12350-12450 now making signs that it may be next.

The fact the market closed on Y2 reveals the high level of its sensitivity but for us the most remarkable aspect was the daily range of just 90 points when it is still cast adrift in an ocean of Y ratio.