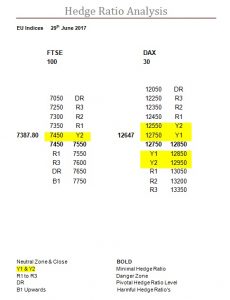 Perhaps all it needed in the FTSE was a gentle reminder that 7400 was not nearly as scary as it once was, not that R1 should be that scary.

Nevertheless it didn’t stop London from testing the bottom boundary of its NZ again, and failing just short is natural for strike 2, with the high of 7445.31 before finally capitulating.

However it still needs to test 7350 and hopefully the dynamic delta support from here will invigorate the bulls enough to enable the market recapture the NZ which would of course be strike 3 as well.

The low here was 12536 so it was a good solid test but the rebound all the way back up to almost breakeven was the result, but clear and decisive unlike the FTSE.

Furthermore it shows good consistency as the high so far this expiry was back on the 20th June when it hit 12951, which is of course the corresponding Y2 above the zone, and when we throw in a NZ bandwidth test just before the break down below the zone it is a perfect example.